Recently, the Antioch Review has published an article full of hateful lies, stereotypes, and absolutely incorrect medical information about transgender people titled “The Sacred Androgen” (link marked as “nofollow” so as not to boost the page’s rank).

In response to this, Brynn Tannehill wrote a scathing condemnation of the article and The Antioch Review itself, titled “Antioch Demonstrates Why Mid-West Kills Queers from the Inside Out“.

And in addition to Brynn’s article, I sent the following email to Christina Check who is listed as the contact for The Antioch Review. I encourage all of you to do likewise. The more they hear from us, the more they may realize they have done something ugly and horribly wrong, and perhaps retract and apologize for that piece of garbage they published.

My letter to the editor lies below this line

If you had published such a pile of garbage laden pile of tripe about black people, your offices might have been buried under angry responses from across the nation already.

If you had published such a garbage laden pile of tripe about gays, you would have been dragged through the major press and rightfully pilloried publicly destroying your reputation.

Yet you think you can get away with it against transgender people?

Your article goes on and paints trans women as sex obsessed fetishists which couldn’t be further from the truth and which theory has been totally destroyed. Bailey’s work on “autogynephelia” has been refuted because what he thought was solely trans obsession turns out to be common natal female behavior as well.

Your author asserts that transgender people are mentally ill while mental health professionals say that being transgender is not a mental illness. Your author then goes on to support reparative therapy which has been proven to increase suicidality, and never ever “cures” anything.

Your author cites the 41% suicide attempt rate as proof of mental illness and ignores that mental health professionals cite that as proof of the deep systemic hatred and oppression our culture has displayed towards transgender people. Mental health professionals say YOU need to change your attitudes towards trans people, and not that trans people need to change.

Your author launches into rape culture objectification of women and then tries to use that as a reason to see trans women with disgust. 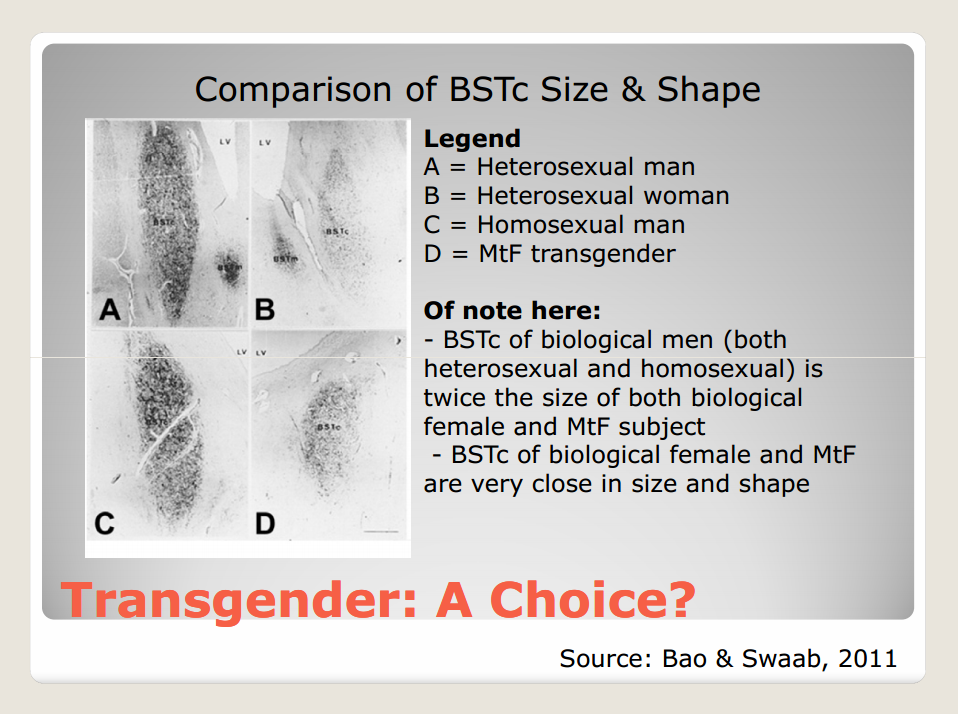 The above microscope slides are just one of many studies demonstrating that trans women have brain structures very similar to cisgender women and nothing at all like gay men.
In short, your article, “The Sacred Androgen”, is hate speech targeted at a minority group that is being actively attacked and oppressed today in popular media and by right wing politicians and churches for being different. Yet the medical community, across the board, supports trans people and who they say they are. There are only a few old fossils, like Paul McHugh, Bailey, and others who get regularly trotted out by the right wing to support these hateful views.

With the publication of “The Sacred Androgen”, The Antioch Review demonstrates that it is not a rational nor respectful publication and that anything it publishes should be ignored, discarded, and that the Review itself should be driven into the ground as a purveyor of hate speech.

You should be ashamed of yourselves but bigots never are. Just like racists have been hiding in the closet for the last 40 years until Trump came along, bigots never give up their ugly ways and we now know that The Antioch Review is a publication of bigots and bigotry.

Recently, on another forum, some individuals were defending Michael Bailey’s utter BS that Bailey was using to defend reparative therapy being used on trans kids. There are a lot of problems with Michael Bailey’s nonsense, not the least of which is that he may be nearly as bad as Zucker up in Canada.

Bailey claims that 80% of all trans identified kids never transition and settle into their lives as their birth sex. But the 80% figure is, as Bailey admits, decades old. It is also highly flawed. The core flaw in that study? Children were being actively discouraged from their gender identity (reparative therapy) and Bailey and his henchmen failed to followup after age 18 to see if these people stayed in their birth gender their entire lives or if they subsequently transitioned as adults. I personally know two older transwomen who Bailey claimed to have “cured”. They said they simply felt oppressed, faked it, waited til they were older, and transitioned when they were out of their parent’s (and Bailey’s) control.

Subsequent advances in diagnostic techniques now allow much clearer distinction between what the profession refers to as “gender curious” children and children who are actually transgender.

Here is info about the Dutch study. There were 55 participants. All transitioned and are happy.

Here is the California study involving Rady Children’s Hospital in San Diego. There were 42 participants. All transitioned and are happy.

In short, Bailey is a quack. He’s full of nonsense. He deliberately quotes outdated statistics. He ignores the last 20+ years of neurobiological research that says this is a medical condition that cannot be reversed or “cured”. And he remains an advocate for conversion therapy, which every major medical and psychological organization in the United States says is immoral and unethical because it consistently leads to increases in suicidality.

Siding with Bailey is dangerous, because anyone who does is lending credence to his “reparative therapy for trans kids” argument. And if anyone believes that works, they can tell it to Leelah Alcorn.